The internet is real life.

This was the lesson of the Christchurch mosque shootings in 2019, which were carried out by a terrorist who was radicalized on YouTube and live-streamed the attack on Facebook. And this was the lesson after Facebook ignored warnings of a planned militia event that led to a double shooting in Kenosha, Wisconsin, this summer. And the lesson after armed supporters of QAnon, the conspiracy theory that views Donald Trump as a savior waging a holy war, were arrested outside a ballot-counting center in Pennsylvania this fall.

Since losing his reelection bid, President Trump has been explicitly pushing conspiracy theories about the election, including specific QAnon talking points about failed voting machines and an individual poll worker whom the group has accused of tampering with votes. His refusal to concede has sparked the #StopTheSteal movement—a broad online coalition of QAnon conspiracy theorists, Proud Boy militia members, MAGA diehards, and some Republican politicians. It spent months amping itself up on social media, making plans to attack its own democracy.

[Read: The prophecies of Q]

The movement has now done exactly what it promised. On Wednesday, a mob took over the Capitol building to stymie the certification of the presidential election. Members of Congress were told to take cover, and then to evacuate. One woman was shot and killed. The New York Times reports that the mob organized on the social-media platforms Parler and Gab, while BuzzFeed News reports that it also used Facebook.

The insurrection is the latest and, in some ways, the most alarming lesson in how online extremism can translate into offline violence, but it should be the least surprising. It was building in online spaces even before the election, and has been escalating ever since. The conversations were public, easily observable, and egged on by the president, who often engaged with them directly, and whose political career has been defined by whipping up paranoia and rage on the internet.

Naturally, the insurrectionists and their supporters have been celebrating all day. On the pro-Trump site TheDonald.Win—the new home of the banned Reddit forum r/The_Donald—forum users gathered for a “watch party,” cheering the mob on. Commenters called for those on the scene to find the “Congress filth,” and posted all-caps approval: “DEATH TO THE WEAK AND DECADENT REPUBLIC! HAIL TRUMP!” Some claimed to actually be at the Capitol, though they could have been posturing for a clearly receptive audience. “I just left … I had a pitchfork and it was heavy! It was damn amazing to see,” one wrote.

[Read: Reddit is done pretending The Donald is fine]

These celebrations were happening even on mainstream platforms. On YouTube, for example, The Verge found several pro-coup live-streams tagged #StopTheSteal, broadcasting from outside the Capitol. I watched another titled, in part, “DC the Day Has Come!!!” that had been running ads and collecting donations from viewers for three hours. (It was at $1,308 when it ended.) On Twitter, new tweets with the #StopTheSteal hashtag were posted every few seconds throughout the day. Users who had been tweeting #HoldTheLinePatriots ever since Election Day were still doing so, but now speaking literally. QAnon believers tweeted that what they were seeing was just like a movie, and the greatest one they’d ever seen. As of 11 a.m. ET on Thursday, many “Stop the Steal” Facebook groups were still online.

Now major platforms have to sift through the mess and make decisions about what they’re willing to tolerate and enable. Though they hesitated to moderate or deplatform Trump for much of his presidency, he’s pushed them to somewhat pointed action in the past several months. On Wednesday, Trump continued to monger conspiracy theories as the mob roamed the Capitol, tweeting that his vice president lacked the “courage” to illegally hand him the election. Twitter prevented retweets of Trump’s post about Pence, and added a warning label noting a “risk of violence.” It did the same when he tweeted a video telling the mob to go home before adding, “We love you. You’re very special.” And when he tweeted, shortly after, “These are the things and events that happen when a sacred landslide election victory is so unceremoniously & viciously stripped away from great patriots,” signing off, “Remember this day forever!”

Twitter later hid these tweets and locked the president’s account until 12 hours after he deletes them—meaning that he will not be posting again until morning, and only if he takes them down now. Facebook also took its boldest stance yet, removing the president’s video, locking him out of his account for 24 hours, and announcing that it will remove all content that praises the insurrection. On Thursday morning, CEO Mark Zuckerberg announced that Trump’s account would be suspended “indefinitely,” and at least until Joe Biden’s inauguration. “We believe the risks of allowing the President to continue to use our service during this period are simply too great,” Zuckerberg wrote, after admitting that Facebook had been used “to incite violent insurrection against a democratically elected government.”

Though radicalization across the internet is an enormous set of complicated problems, there have already been calls for a quick solve to the most obvious one: ban Trump. Twitter has been under public pressure to do so for years. The company declined to comment Wednesday on whether it would remove him from the platform entirely, but shortly after the election, when I spoke with several experts on moderation, they speculated that the company would take that action only if Trump incited violence after leaving office. For now, he remains president, and his account is protected by an exemption that Twitter carved out specifically for him. The company’s argument has always been that a president’s statements are newsworthy, and should be seen by the public, no matter what they are.

After this week, it will be even more difficult for Twitter to defend that position, and for anybody to suggest that tweets are just tweets. 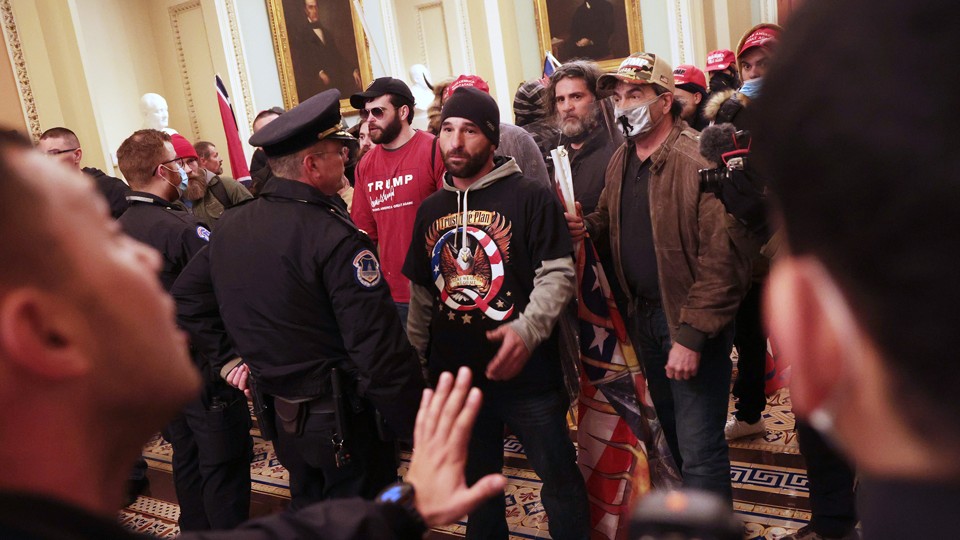 The TikTok Effect: 6 lessons from TikTok trends to influence your social strategy

The ultimate guide to using Facebook stories for business

How to protect your APIs against these 6 security threats

The TikTok Effect: 6 lessons from TikTok trends to influence your social strategy